One of United’s three core commitments is The Cultivation of Holiness. We believe in the life-changing power of the Holy Spirit in worship, who helps us to become the people God created us to be.

The Richard A. and Nancy Zimmerman Chapel

On October 11, 2016, United Theological Seminary dedicated the Richard A. and Nancy Zimmerman Chapel, a new permanent worship space. For 20 years, Mr. Zimmerman was a member of United’s Board of Trustees, acting as Chair of the Board for eight of those years. Mr. Zimmerman served as CEO of The Hershey Company in Hershey, Pennsylvania, for many years. When he passed away in 2014, Mr. Zimmerman left a legacy of worship through a generous bequest to provide a permanent chapel at United. Mrs. Zimmerman has devoted additional funds to the project to ensure that the worship space will be best suited to the needs of the seminary, both now and in the future.

Architectural Elements of the Zimmerman Chapel:

The Cross – Designed with wood from United’s property, three branches are intertwined to represent the three persons of the Holy Trinity. It also draws inspiration from Ecclesiastes 4:12, “A cord of three strands is not quickly broken.” There is space between the branches because God sees us as humans looking through the lens of the cross, forgiven because of the sacrifice Christ made there for our sins. Finally, the cross is not formed in straight lines but rather has a flowing style representing the movement of the Holy Spirit here at United and in each of our lives. 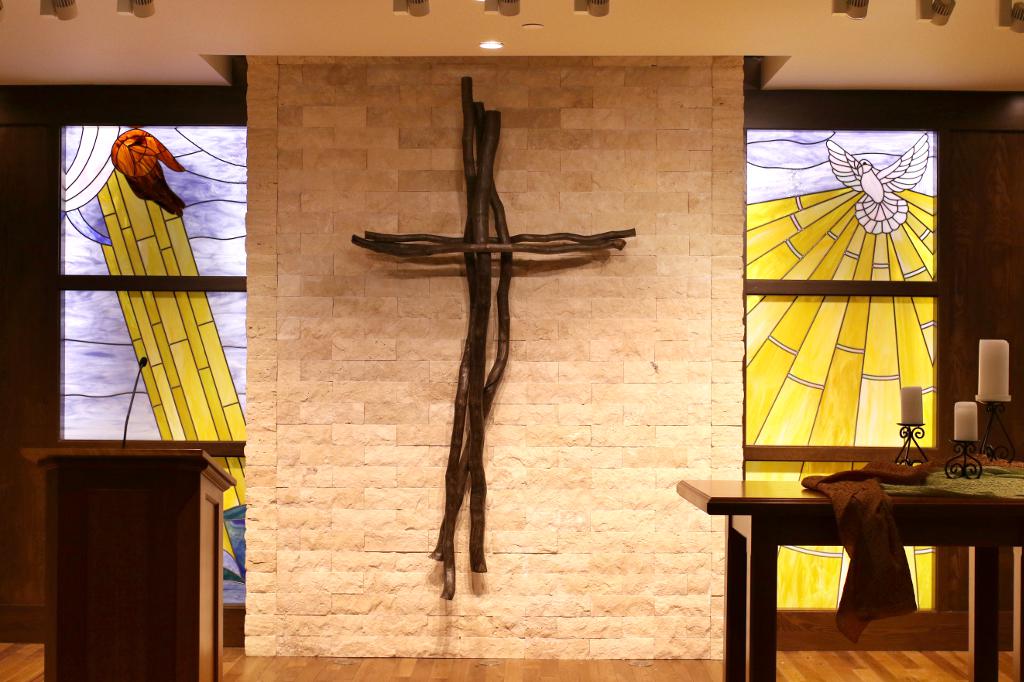 The Stained Glass Windows – The window on the left depicts God the Father through a hand over the waters of creation. God is the Father and Creator of the whole universe.  The window on the right depicts God the Holy Spirit represented by the dove radiating God’s love, joy and peace. These two windows with the cross in between representing God the Son, combine to represent the Holy Trinity.