Houses of Study at United equip students for service in the communities, movements and denominations where they serve. Houses support students in several ways: through academic tracks in United’s Master of Divinity program, through mutual support in formation groups, and through mentorship from facilitators and spiritual directors in United’s Contextual Ministries program. Houses may also include related non-degree certificates and groups in United’s Doctor of Ministry program. Within a House of Study, you will find support from a House of Study director and fellowship among your peers.

Most courses are offered fully online. Each degree program includes academic study in the following areas:

*Contextual Ministry courses include three-day face-to-face retreat(s), to be held at Manna Church in South Korea. For the MDiv, there are two retreats, held annually during the Summer term of the second and third years. The MACM and MMin include one retreat each held during the Summer term.

United’s MDiv meets the requirements for ordination in most Protestant denominations, though many graduates serve as lay professionals in a variety of fields, including chaplaincy, nonprofit leadership, teaching and social work.

The establishment and maintenance of Houses of Study at United Theological Seminary are dependent on sufficient enrollment. 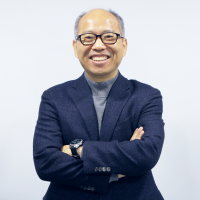 Pastor Byoung Sam Kim is the senior pastor of Manna Church in Korea. He is an outstanding worship leader, an engaging preacher, and a leader who creates a new pastoral paradigm.

His sermons, in which intelligence and emotion are properly combined, have the power to change lives. He is regarded as a representative preacher of this era who unleashes sharp theological views with excellent eloquence.

In 2004, when Pastor Byoung Sam Kim was appointed as the senior pastor, Manna Church, which had around 3,000 members, has been greatly revived as a megachurch with more than 12,000 members present. He once held a ministry aimed at growth and revival, but he is constantly struggling and challenging himself and the church to mature, and to become a mission-oriented church rather than church-oriented, dreaming of a church that becomes the hope of this land.