A recent report from the Association of Theological Schools shows the Ohio seminary to be one of the 12 fastest-growing in the last five years.

Seminary president Wendy Deichmann attributes much of the school’s recent success to its online education programs.

“We have a really compelling, relevant program, and because of that we’ve been able to connect with a whole new population of students,” she said.

“The reasons that some schools have enjoyed extraordinary enrollment growth during the past five years are idiosyncratic,” said Daniel Aleshire, executive director of ATS. “Each growing school has its own success story to tell.”

President Deichmann says that United’s story is one of renewal. Just 10 years ago, United was struggling, enrolling fewer than 200 students at its lowest point. But once the Seminary adopted a curriculum focused on church renewal, things began to change.

President Deichmann credits that focus on renewal with the school’s turnaround and its continued growth over the last five years. The school’s primary goal continues to be to prepare church leaders who will renew and lead vibrant, faithful churches.

“With mainline Protestant denominations experiencing decreased membership, we realized that we couldn’t be just one more seminary contributing to that trajectory of decline,” she said. “We believe God is always working to bring hope, new life and renewal to the church, so if it’s struggling, then something is wrong and we have to address it.”

United Theological Seminary is a graduate professional school of The United Methodist Church offering masters and doctoral theological degrees and continuing education with programs offered on campus and online. United’s goal is to educate dynamic, Spirit-led leaders who will renew the church for the mission of Jesus Christ in the world. 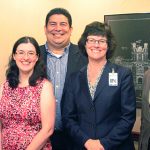