Consistently, 53% to 55% of the 820 delegates who were present voted to support various motions related to the implementation of the Traditional Plan, which maintains the current ban on ordaining gay United Methodists or performing weddings in our churches for homosexual persons.

On the other hand, a significant minority of the delegates, 45% to 47%, voted against the Traditional Plan. The One Church Plan, which would have allowed pastors, congregations and conferences to decide if they would ordain gay clergy and allow same-sex marriages, did not receive enough votes in the legislative session to be considered in the plenary session.

It is obvious to me that we are a denomination deeply divided over this issue and that our best efforts to find a way to keep the denomination together over the past 40 years have not been successful.

This situation causes me to weep because I have good friends, all deeply devoted disciples of Jesus Christ, who are on opposite sides of this issue. I have attended 12 General Conferences since 1976 and have been part of countless dialogues and commissions that have tried to find a way to unify our denomination without success. In the past, I have opposed all efforts to divide our denomination.

This past General Conference, however, convinced me that continuing to quarrel over this issue hurts people on all sides, does not glorify God, does not demonstrate unconditional love for all people and does not help make disciples of Jesus Christ for the transformation of the world.

Therefore, with a heavy heart and deep regret, I personally believe it may be time for our leaders to find a way for United Methodist Christians to separate, so that we stop harming each other and each side can get on with the business of sharing God’s Good News with a hurting world in new and separate organizational structures.

Even in the New Testament, St. Paul and Barnabas had a disagreement over the faithfulness of Mark. Acts 15:39 says: “The disagreement became so sharp that they parted company.” Barnabas took Mark and they went to Cyprus; Paul took Silas and they went to share the Good News throughout Syria and Cilicia (Acts 15:36-41).

At the Denali Visitor Center in Alaska there are the skeletons of two bull elk, who fought against each other so intently they interlocked their horns. Neither could disengage from the other, so both died interlocked with their opponent. If we United Methodists cannot find a way to peacefully disengage from our conflict, we may severely damage the mission and ministry of The United Methodist Church for decades to come.

Regardless of how The United Methodist Church is organized now or in the future, the mission of United Theological Seminary remains the same. United welcomes any followers of Christ — regardless of denomination, race, nationality, gender or sexual orientation — to be a part of our seminary community, so that God can use them to become faithful, fruitful leaders who make disciples of Jesus Christ for the transformation of the world.

In the Sermon on the Mount Jesus said, “Blessed are the peacemakers for they will be called the children of God” (Matthew 5:9). United Theological Seminary is in a unique position and willing to serve as a peacemaker in this time of conflict.

May God bless us all as we seek to be faithful leaders in a challenging time. 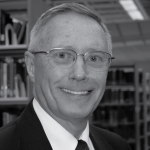