Slowing Down for Holy Week

Let the same mind be in you that was in Christ Jesus, who, though he was in the form of God, did not regard equality with God as something to be exploited, but emptied himself, taking the form of a slave, being born in human likeness. And being found in human form, he humbled himself and became obedient to the point of death — even death on a cross.
— Philippians 2:5-11

Holy Week, or Passion week, is the time when Christ-Followers reflect on the loneliness, isolation, betrayal, pain and suffering that Jesus Christ experienced before his sacrificial death on The Cross. It’s a week that can be easy to skip over in our attempt to avoid discomfort and hurry to the tomb for resurrection. But this year could be different. Lent’s 40 days of self-denial have taken on new meaning.

It has taken a global pandemic to help us recognize how finite humanity is and how essential it is to find dependence outside of ourselves to receive the abundant life that Jesus refers to in John 10:10. It’s impossible to get to the resurrection unless we experience a daily death to our selfish desires, ambitions and patterns.

While the world is learning a new practice called “social distancing,” how do we cling to a God who wants to draw near to us? The Apostle Paul tells us in Philippians 3:10, “I want to know Christ — yes, to know the power of his resurrection and participation in his sufferings, becoming like him in his death.”

All of us, at the moment, find ourselves dying to something. It means letting go of schedules, social outings, vacations, birthday parties, or anniversary celebrations for the betterment of ourselves and those around us. This may be more sacrificial for some than others, but in doing so we join people in 151 countries who are also giving up some normalcy and are experiencing their own discomforted life.

At the moment, I can’t help but think about my two sisters who are serving in nursing homes and my niece, who works at a hospital in New York. They are sacrificing and risking themselves every day by going to work and carrying out their calling. But isn’t that what the Christian life should be about: putting it all on the line to bear witness of what Christ has done in our lives.

So I want to challenge you in this Holy Week to think of the one who gave up everything from the very start to become a human being. Jesus served others, was rejected by his own people, and was abandoned in his greatest hour of need, which more than likely felt like complete isolation and quarantine. Take advantage of any spare time you have to go through this week by remembering what Jesus experienced in his final days on earth.

Sunday is coming, but let’s slow down and embrace the pain of each day by identifying in Christ’s suffering, that we too may be conformed to his image.

Join United at 1 p.m. on Facebook Live every day during Holy Week, April 6-10, for a series entitled God’s Invitation. Alumni/ae, students and staff will be offering devotionals based on the lectionary passages for each Holy Day. Tune in to be encouraged and challenged as we listen for God’s invitation to us through the Holy Week scriptures. 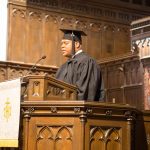 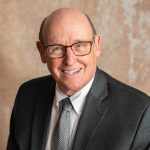